What next for learning recovery? Evidence from our most recent Teacher Voice Survey

Last year, NFER research estimated that, by July 2020, pupils were, on average, three months behind their usual learning levels, and that the disadvantaged learning gap had widened. We have just completed the third in our series of Covid-19 surveys, with over 1,500 teachers and senior leaders in our Teacher Voice panel. We discovered some positive shifts in pupils’ learning experience during the most recent period of partial school closures. These are a credit to the hard work of teachers, parents and pupils, but look unlikely to have been enough to halt further increases in some pupils’ ‘learning losses’, or in the widening of the disadvantaged learning gap.

This means that learning recovery is ever more important, especially for the most disadvantaged pupils. So, what did the teachers and senior leaders in our survey think about current and proposed recovery strategies, and how should their views be taken on board?

In this blog we will make reference to the three separate periods of partial school closures as follows:

But there were still sizeable proportions who did not return set work or attend live lessons. Schools were also still unable to cover all the curriculum content that they would normally have expected to during this period (70% was covered in period 3, compared to 66% in period 2). Although pupils’ average rate of IT access improved, progress should have been quicker. The Government's laptop scheme did not have the impact hoped, with almost one fifth of pupils still having limited IT access at home by March 2021. In period 3, these pupils could attend school to use IT facilities and, according to senior leaders, approximately 45% of the 17% with poor home access did so. This still left around 9% of pupils with limited IT access (and therefore very limited access to remote teaching and learning).

Most concerningly, the learning experience also remained far from equal across the social divide. The deprivation gap that we reported last year persisted, with pupils in the most deprived schools significantly more likely than those in least deprived schools to have low levels of engagement with their learning, and poor IT access, for example.

Learning recovery – What does the profession think?
Our latest findings further illustrate the need for learning recovery, especially for the most disadvantaged. To help the Government formulate its plans, we asked our panellists their views on a number of government proposals and others' ideas (Graph 2). Then we asked senior leaders which strategies they were actually using, or intending to use to help pupils recover learning (Graph 3).

The findings show that the the profession is somewhat at odds with the current direction of travel – although we wait to hear what Sir Kevan Collins, the Education Recovery Commissioner decides. He has noted that ‘nothing is off the table’ and will be discussing options with the profession. 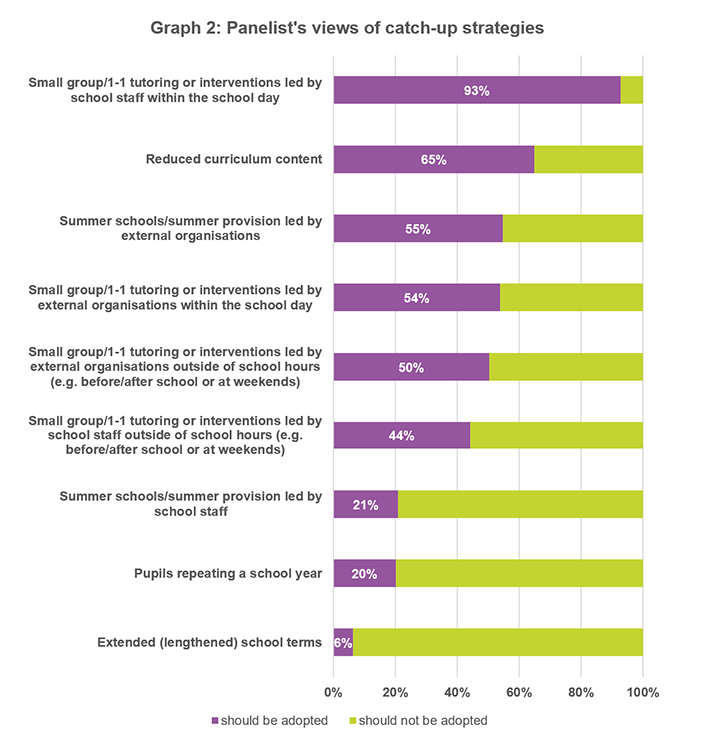 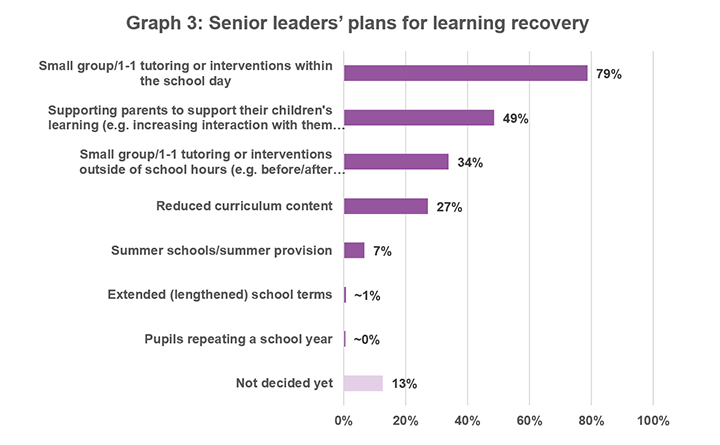 Broadly speaking, the profession shares the Government’s evidence-based commitment to tutoring. Graph 2 shows that there is high support for it when delivered by school staff within the school day, but less support when it is delivered by other organisations.

Summer schools are very unpopular, especially if led by school staff, which is an expectation in the summer schools strategy (see Graph 2). Government summer school funding is aimed at secondary schools for upcoming Year 7s, yet only one in five secondary leaders (22%) intended to run one. The profession has virtually no appetite for, or intention to use, ideas with a weak evidence base, such as pupils repeating a school year, or extending the school term. Recent research shows that parents have similar views. Government may wish to reflect on such suggestions, given their limited support.

The DfE has specified that schools should still be delivering a broad and balanced curriculum. However, almost two thirds of our panel believed that reducing curriculum content (a mitigation rather than a recovery approach) should be used to help pupils move on (see Graph 2). Graph 3 shows that a smaller, but not insubstantial, proportion of senior leaders (27 per cent) were currently reducing, or intending to reduce, curriculum content. More investigation is needed to understand this practice and its acceptability.

What do we recommend?

Most pupils have fallen behind but, with time, many will catch up. However, those who have missed the most learning – often the most disadvantaged –  need targeted support. The DfE doesn’t appear to be making any adjustment in the financial support available for summer schools according to school disadvantage, and although more senior leaders from both phases in disadvantaged schools are intending to run a summer school, only a minority of the most deprived schools are planning to run one. Similarly, the NTP has been criticised for failing to support sufficient numbers of disadvantaged pupils, although this is being addressed in the plans for phase 2. It appears to be a challenge to target support where it is needed most.

We are supportive of Sir Kevan Collins’ intention to prioritise discussions with the profession in order to formulate a long-term learning-recovery programme. Teachers have clear views about learning recovery and senior leaders are already moving forward with their plans, some of which do not align perfectly with government proposals or strategies. We recommend that there is thorough consultation of, and engagement with, the profession to avoid further misalignment, and to ensure that a learning recovery strategy is developed, which is fit for purpose, which commands widespread support, and which targets support to the pupils that need it most.

For more detailed commentary, download the following publication: The impact of Covid-19 on schools in England: experiences of the third period of partial school closures and plans for learning recovery