The last PIRLS cycle happened in 2016. The international report for PIRLS 2016 was released in December 2017 by IEA.

Key insights from PIRLS 2016 Northern Ireland - What the evidence shows 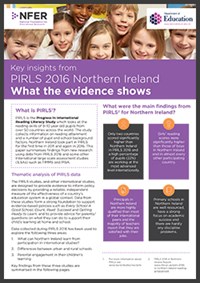 This key insights briefing summarises three recent reports that use information from the PIRLS 2016 study in Northern Ireland, and other ILSA data to explore:

Other sources of information: